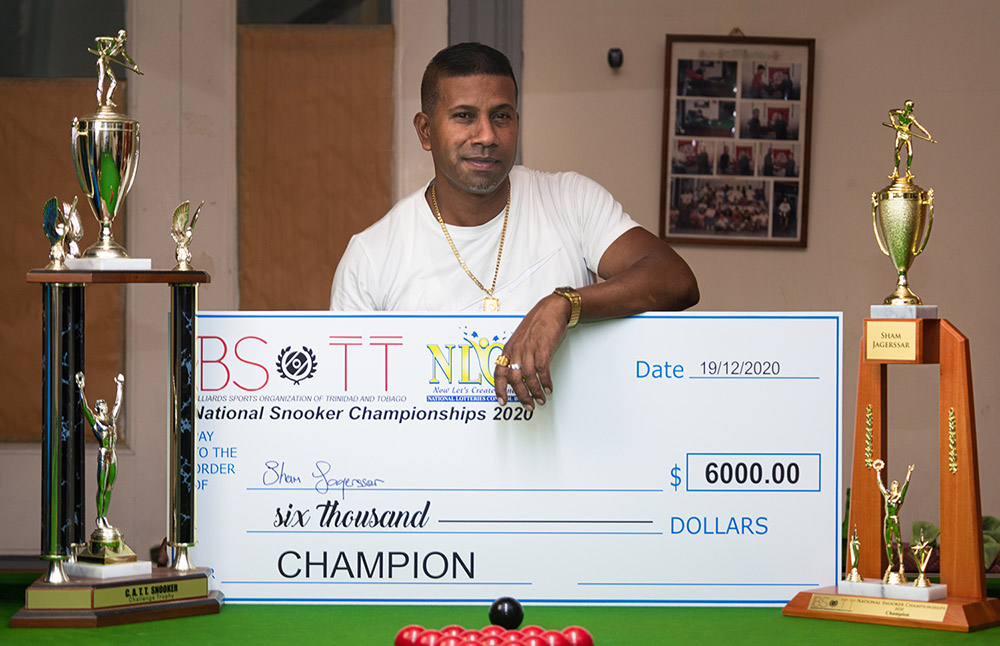 Organised by the Billiards Sports Organization of Trinidad and Tobago (BSOTT), the event was supported by and held at the Chinese Assocation Club in St. Ann’s, a district of the capital city’s Port of Spain.

An impressive field of 40 players entered the tournament which was played across several weeks and streamed live on BSOTT’s Facebook page. It featured a double elimination format meaning all competitors had two ‘lives’.

Jagessar had already orchestrated four match wins before defeating Clint Bachan 2-1 in the winners’ side final. He was met in the grand final by Bisnath, who had walked a tightrope in the losers’ section having lost to Jagessar in his second outing of the competition. Following that setback, Bisnath needed to wade through seven matches to make the championship fixture, which he duly did, culminating in a 2-1 victory against Bachan.

Due to the double elimination nature, Bisnath was required to overhaul Jagessar twice in the best-of-five finals to complete a remarkable recovery. He was on course to do so when he won the first encounter 3-1 and led 2-1 in the conclusive rubber. However, Jagessar turned things around again, chalking up the fourth frame and then the decider to secure the historic title, trophy and $6,000 (Trinidadian Dollars) in prize money.

Snooker to make waves in the country?

BSOTT Public Relations Officer Adrian Mora is one of the people behind the championship and who will be pushing the sport of snooker forward in the island country. Following the championship, we spoke to Adrian to learn about snooker’s past, present and future there.

Hello Adrian, thank you for talking to us at such a busy time. Could you tell us a bit about BSOTT and the people behind the organisation?

The Billiards Sports Organization of Trinidad and Tobago has been in existence since August 2018. Our interim executive consists of Nazim Mohammed (President), Kazim Daniel (Vice President), Fidel Mohammed (Secretary), Carlos Poyer (Treasurer) and myself. We hope to have elected officers in the positions when our first general meeting takes place early in 2021.

You must be very pleased with the way the championship panned out, especially in a year with the coronavirus pandemic. How did you overcome such obstacles?

This was BSOTT’s first individual national championship and we are really happy with how things turned out. Obviously, being a first, there were some hiccups along the way but at the end of it all there were many more positives than negatives.

The coronavirus scuppered many of our plans for 2020 but the window of opportunity opened for us when our government – on the advice of the Ministry of Health – relaxed restrictions with regard to Members’ Clubs. The Chinese Association venue in T&T is one of the few accessible places where snooker is played. They normally host a pre-Christmas tournament so with BSOTT’s limited activity for the year, we seized the opportunity to partner with them to host our first national snooker championship.

What is the overall picture for snooker in Trinidad and Tobago in terms of history, participation and visibility?

In the 1960s, English billiards was more popular on the 12ft table. Snooker took off in the 70s and 80s with as many as 11 venues in Port of Spain – the nation’s capital in the north of the island. Elsewhere there were at least ten other venues that had snooker facilities.

In the 70s there was a very active North Association, so much so that a Trinidad and Tobago representative team of four participated in the International Snooker League in New York. Also, in the same decade snooker greats Alex ‘Hurricane’ Higgins and Rex Williams visited Trinidad on separate occasions, which helped the game’s popularity. Those names were familiar to many because of the hugely popular BBC TV series Pot Black – incidentally, the theme song used for this was ‘Black and White Rag’ written by Winnifred Atwell, a native of Trinidad and Tobago.

With regard to present day coverage, we are lucky to have some willing reporters across both print and electronic media, and while we are not at the stage where matches are shown live on local television, we will get some help promoting the sport.

Can you tell us about your efforts and plans to revive the sport in your country? What are your hopes for the near and distant futures?

Our mandate is to add structure and a level of professionalism to all cuesports. Pool, by far is the more popular sport in Trinidad and Tobago – it is more accessible with more public venues. Unfortunately, snooker’s popularity waned with the closure of many snooker establishments; maintaining tables was apparently too costly for many and you found tables being sold to homeowners and private entities.

What BSOTT hopes to do is engage as many stakeholders as possible – our Ministry of Sport, corporate T&T, international organizations, anyone who may be able to help in our cause to raise the standard and profile of the game.

We hope to one day have our own headquarters where we can train, offer training (maybe with the help of professional coaches), and so on. We were recently accepted into the PABSA (Pan American Billiards and Snooker Association) family so, with some luck, we will be taking part in their events.

We understand that BSOTT is very keen to engage and encourage younger and female players?

If a sport has no injection of youth, it will ultimately die. So yes, we are very interested in introducing the game to younger players – boys and girls – so there is continuation going forward. That is where the ‘headquarters’ will play a major role by offering a more controlled environment for any educational or instructional programmes on offer.