Andrew Pagett is set to snooker’s top tier after he defeated Heikki Niva in the final of the 2020 EBSA European Amateur Snooker Championship.

A former Crucible Theatre qualifier who last featured as a professional in 2015, Pagett becomes the fourth different Welshman to claim the prestigious continental event, in this its 29th edition. Former winners of this championship include Mark Allen (2004), Luca Brecel (2010) and Scott Donaldson (2012).

Due to the ongoing COVID-19 pandemic, the entry and schedule for this year’s tournament in Albufeira, Portugal was reduced.

Pagett began his campaign by topping his group without dropping a frame and qualifying for the subsequent knockout rounds. There he dispatched compatriot Ben Fortey 4-2 before eliminating Northern Irish national champion Declan Lavery 4-1 with breaks of 56 and 79 to reach finals day. During the last four, the 37-year-old registered runs of 50 and 57 as he overcame fellow ex-professional Ross Muir of Scotland 4-2.

In the other half of the draw Niva advanced to become the second player from Finland to reach the European title match, following in the footsteps of 1997 and 2013 champion Robin Hull. On his route Niva ended the hopes of English amateur champion Ben Hancorn and Belgian national champion Kevin Hanssens via deciding frames in the quarter and semi-finals respectively.

The final brought together the top two seeds from the round robin phase. Looking to gain promotion onto the main tour for the first time, 24-year-old Niva calmed his nerves by taking the opening frame. However, it would be the only time he led as Pagett strung together the next four frames – which included a tie-break finish in the fourth – to move one away from glory. The outsider reduced his arrears when chalking up frame six, but the Caerphilly cueist wasn’t to be denied as he sealed the next to win 5-2.

Pagett has featured and performed very well on this season’s Challenge Tour, recording an event victory and finishing third in the overall standings. However, he will no longer need to attend the play-offs as this latest triumph ensures that he will be nominated to receive a coveted two-year World Snooker Tour card.

Preceding this event, exciting Ukrainian prospect Iulian Boiko won the European 6-Red Championship. The 14-year-old progressed through his group and then six knockout round matches, culminating in a 5-3 final success against former world number eight Darren Morgan. Courtesy of the title, Boiko will represent the European Billiards and Snooker Association at the 6-Red World Championship later in the year.

Earlier in the festival at the Salgados Palace Hotel, the Republic of Ireland’s Aaron Hill completed an unprecedented double by conquering both the European under-18 and 21 categories. The latter rewarded the Cork teenager a debut on the full-time professional circuit.

Results – from the quarter-finals onwards

The Republic of Ireland’s Aaron Hill defended the EBSA European Under-18 Snooker Championship after he defeated Sean Maddocks 4-1 in the final in Portugal last night.

Featuring 70 players from 24 different countries, Hill was the last cueist remaining following four days of action at the Salgados Palace Hotel in Albufeira. The teenager follows in the footsteps of current main tour professional Jackson Page who retained this title in 2018.

Hill had no issues in qualifying for the knockout stages as he topped his group with four wins from four and crafted the tournament’s highest break of 131. He then dispatched Luis Vetter (Switzerland) 3-1 before dropping no subsequent frames against Liam Graham (Scotland) 3-0, Joe Fenton (England) 4-0 and Ben Mertens (Belgium) 4-0 to make the final.

For Maddocks it was his second major international final appearance in just over two months after reaching the title match at the World Snooker Federation Junior Open in Malta. The Englishman also went through undefeated, eliminating recent Polish national champion Antoni Kowalski 4-3 from 3-1 down in the quarter-finals and fellow countryman Connor Benzey 4-1 in the last four.

Looking to avenge his whitewash loss to Maddocks during the semi-finals of the previously mentioned WSF Junior Open, Hill made an ideal start to the final as he compiled breaks of 73 and 55 to take the opening frame. The Irishman doubled his lead and it was looking like he was going to inflict a clean sweep of his opponent when a run of 92 allowed him to move 3-0 up. Maddocks got on the board with frame four but a 50 break helped promising prospect Hill secure a 4-1 victory and once again lift the trophy.

Elsewhere in the tournament, 13-year-old Bulcsú Révész (Hungary) and 15-year-old Robbie McGuigan (Northern Ireland) finished the groups phase as the top seeds, although Révész lost to Benzey in the quarter-finals and McGuigan bowed out to Joe Fenton (England) in the last 32. The Ukraine’s Iulian Boiko – runner-up at the recent World Snooker Federation Open – lost to Benzey in the last 16 and Dean Young – a winner on this season’s Challenge Tour – also went out at the same stage to Kowalski.

Attention in Portugal now turns to the lucrative European Under-21 Championship across the coming days where the winner will be offered a two-year professional World Snooker Tour card.

Results – from the quarter-finals onwards:

Several continental titles were decided during the recent 12-day stay of the European Billiards and Snooker Association (EBSA) at the Hotel Crown Plaza in the Serbian capital city of Belgrade.

Players from 31 different countries took part in this festival of European amateur snooker with 6-Red, Open, Women’s, Seniors and Team Championships on the agenda. It was the first time that the Snooker Federation of Serbia had hosted such an event.

In the 6 Red discipline, Alexis Callewaert won his and France’s first ever European accolade when he ousted fellow debut finalist Pawel Rogoza.

Callewaert finished second in his group to qualify for the knockouts where his most impressive victory was a 4-1 success over defending champion and KO top seed Shachar Ruberg (Israel) during the last eight. The 23-year-old followed that up in the semi-finals by denying Spanish national champion Francisco Sanchez-Ruiz, 4-2.

Both players traded frames in the final, but despite Poland’s Rogoza reaching the hill first, it was Callewaert who claimed the last two frames to come through as a 5-4 victor. The Frenchman is set to be the EBSA nomination for the SangSom 6-Red World Championship that takes place in Thailand during September.

Former Crucible qualifier Kristjan Helgason added another continental trophy to his collection after he was victorious in the 2019 European Snooker Open – an event that reverted back to the traditional 15 red format.

Icelandic Champion Helgason saw off opponents from England, Albania and Bulgaria on his way to the last eight where he stopped the charge of promising 12-year-old Bulscu Revesz (Hungary), 4-1, and then Ruberg by the same score to book a spot in the final.

Better known for his skill on the American Pool table, Sanchez-Ruiz once again showed off his cuesports versatility to make his maiden European snooker final. However, highlighted by a top effort of 73, experienced Helgason came up trumps in recording a 4-1 triumph. The 1998 European Amateur Champion will be rewarded with a wildcard into the main draw of the 2020 Gibraltar Open. 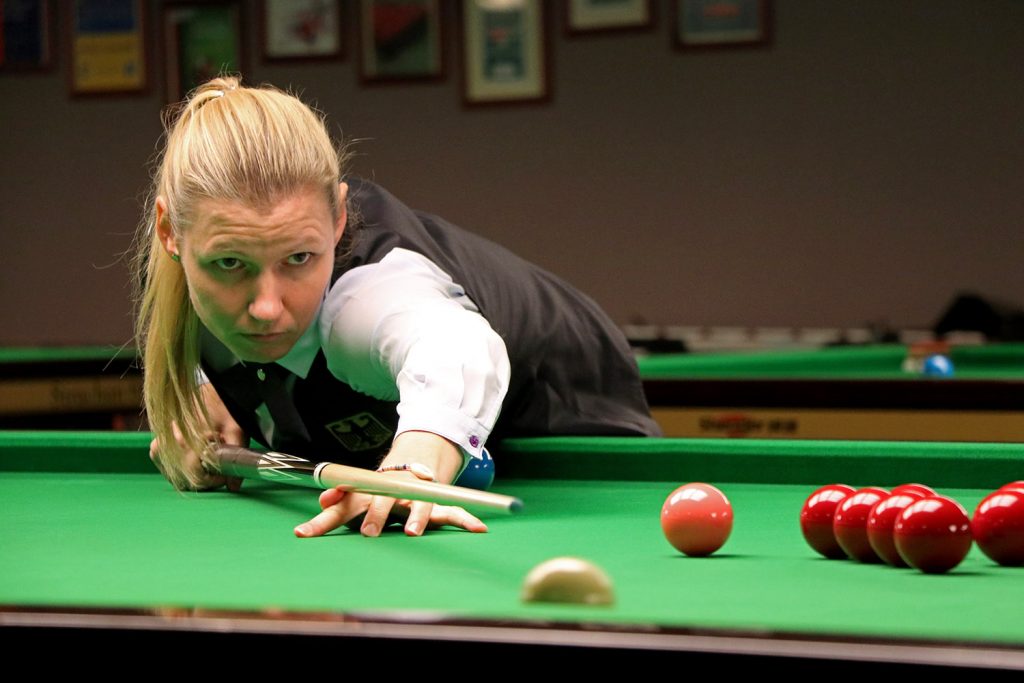 The European Women’s Championship conjured up a surprise as Diana Stateczny became only the sixth different winner in the 23-year history of the event.

Germany’s Stateczny bossed her round robin group, qualifying top after winning all four of her fixtures 2-0. The 39-year-old was pushed in the last 16 by Ewelina Pislewska (Poland), but a 40 break in the decider was perhaps the crucial factor as she squeezed through, 3-2. A second final berth in this competition – nine years on from her first – was confirmed when she subsequently ended the ambitions of teenagers Polina Astakhova (Russia) and Linda Erben (Germany).

In the opposite chair for the final was Russia’s Anastasia Nechaeva, who had created a huge upset when she dethroned defending champion Wendy Jans, 4-1, in the quarter-finals. Belgium’s Jans was aiming for a record-extending seventh title in a row; incredibly, she had also reached the final in every one of her 19 previous appearances in this tournament.

Defeated by Jans in the 2013 and 2014 finals, Nechaeva initially went behind in this year’s showpiece but efforts of 49 and 31 contributed to her moving 2-1 up. Stateczny though would be the one celebrating her maiden triumph after stringing together the next three frames for glory to etch the first German name on the trophy. 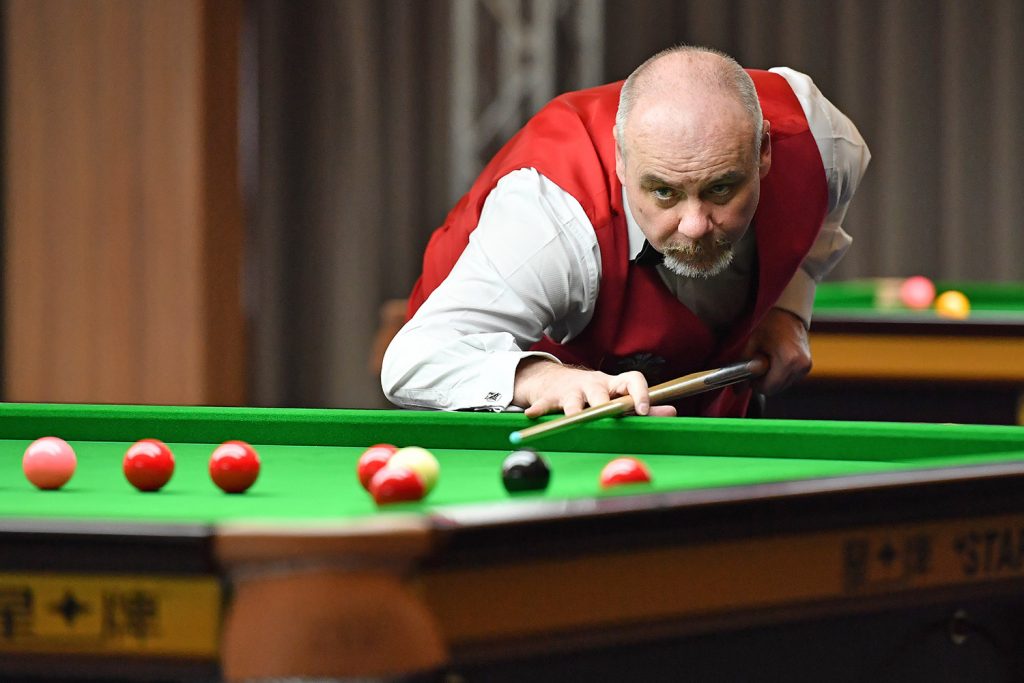 Darren Morgan continues to dominate the 40s and over category as he defended and won his tenth European Masters Championship.

Since retiring from the professional ranks in 2006, the former world number eight has been a serial winner on the amateur circuits. The 53-year-old Welshman qualified for the knockouts without dropping a frame and only lost three in total getting to the final with standout victories over Helgason (4-1 in the last 16) and England’s Wayne Brown (4-1 in the semi-finals).

Fellow experienced cueist Alan Trigg (Ukraine) was Morgan’s opponent in the final. Likewise, Trigg finished top of his group without reply before enjoying a relatively serene passage through the knockouts that included a 4-2 win over a returning Tony Drago (Malta) in the last eight.

Breaks of 48 and 46 helped Morgan take the first frame in the final, although 60-year-old Trigg responded by acquiring the next two to move 2-1 up. However, Morgan wasn’t to be denied as runs of 46 and 44 assisted him back in front before success in frame six meant he raised the trophy for a fifth consecutive year.

As a result of this win, 1994 World Championship semi-finalist Morgan will return to the Crucible Theatre in Sheffield for August’s ROKiT World Seniors Championship.

The duo formed a cohesive unit in the two-player competition that involved frames of singles and doubles action. Malta were strong throughout; losing just a frame in the groups and therefore attaining top seed status for the knockouts. Bezzina and Drago then eliminated teams from Croatia, Belgium and Ukraine to make the final, where they got the better of Polish pairing Mateusz Baranowski and Tomasz Skalski, 4-2.

Russia’s Nechaeva and Astakhova retained the Women’s Team Championship title they won in Bucharest last year following a 3-0 defeat of Germany (Stateczny & Erben). There was more kudos for Morgan, who alongside Wayne Morgan, triumphed as Wales 1 in the Masters Team Championship when they pipped England 1 set-up of Brown and Chris Hart in the final.

For the full results from all of the championships, please visit the EBSA website.